Secret Prophetic Message in the Transfiguration 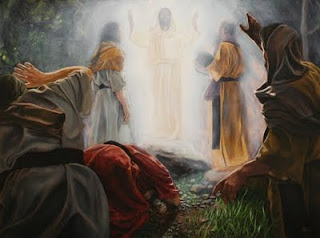 One day Jesus told his disciples, “For the Son of man shall come in the glory of his Father with his angels; and then he shall reward every man according to his works” (Matthew 16:27).  Obviously, Christ was alluding to his Second Coming through use of these words.  But then with his next breath, he says, “Verily I say unto you, There be some standing here, which shall not taste of death, till they see the Son of man coming in his kingdom” (Matthew 16:28).  And with those words Matthew chapter 16 ends!  How strange, huh?  What did Christ mean by this? Certainly there weren’t disciples listening to Jesus speak who were going to live on Earth all the way up until his return!

The answer to the riddle is in what happened next, written about in the very next chapter: “And after six days Jesus taketh Peter, James, and John his brother, and bringeth them up into an high mountain apart, and was transfigured before them: and his face did shine as the sun, and his raiment was white as the light” (Matthew 17:1-2).  See, Peter, James, and John were who Jesus was speaking about in Matthew chapter 16, for they were now getting to witness Jesus the way he will look on the day he returns, shining like the burning sun in his glorious spiritual body!  In other words, they got to see him the way he will look “coming in his kingdom”.

So what’s the secret prophetic message in this miraculous story?  Look at the first 4 words that begin Matthew chapter 17, “And AFTER 6 DAYS…”  And WHEN will Jesus Christ return to Earth, coming in his kingdom in the clouds with great glory, rewarding each person for their works and transfiguring all the resurrected righteous?  That’s right, my friend … AFTER 6 DAYS (6,000 years)!!!  And now you know…the ‘rest of the story’.

Blessings to you this Holy Season,

Approximately 907 Weeks (Sabbaths) Remaining Till Christ's Return!
Posted by Gabriel at 11:48 AM No comments: 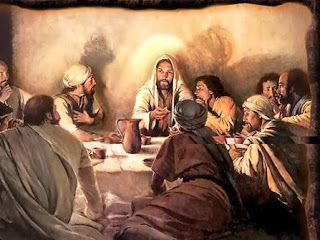 Around 3300 years ago the Israelites were enduring their 400th year of bondage (separation from the Promised Land) in Egypt. But God had informed them through a man named Moses that He ‘heard their cries and knew their sorrows’ and that He was coming down to deliver them that year!
Curiously, God picked a specific night for the deliverance event; it was to be the full moon night of Nissan 14. (Jewish months are lunar based, so the 14th always falls on the full moon.) On that night, God was going to send a death angel around to kill all the firstborn in Egypt, after which Pharaoh would free the Israelites.
But to save the Israelites from the death angel (and ultimately deliver them out of bondage) God devised a seemingly strange, yet very exact, plan for them to employ in order that the death angel would pass over without killing any of them…the Israelites were to choose a male, non-blemished lamb on the 10th of Nissan, kill it on the evening of the 14th of Nissan without breaking a bone in its body, spread its blood on the doorposts of their houses, and then roast its flesh with fire and eat it that night in their houses. How weird, huh? What on Earth was God thinking coming up with this 'crazy' plan? Does the Creator God just like to invent specific things for His children to do without any rhyme or reason?
Well, a little over 1300 years later, the amazing truth behind the yearly commemorated Passover night was revealed. For on a Passover night (the 14th of Nissan) the sinless (non-blemished) man (male) Jesus ate the Passover meal with his disciples, was captured later that evening in the Garden of Gethsemane, tried and convicted in the morning hours, and crucified (killed) without a bone in his body being broken later that day. In so doing, he precisely fulfilled every detail of God’s Israelite Passover lamb and became mankind’s sacrificial Passover Lamb, whose blood delivered us from our bondage to sin and death. Stunningly, and little known, Jesus even fulfilled God’s secret prophetic timing detail to deliver the Israelites out of bondage after 400 years by dying on the cross during mankind’s 4,000 year, and he will most certainly return to Earth during mankind's 6,000 year!
Passover (the 14th of Nissan) arrives at sundown Sunday, April 17, this year. If it’s a clear night in your area, maybe you could walk outside and look up at the full moon and spend a little time remembering the Israelites’ Passover night in Egypt and then Jesus’ Passover night in Jerusalem. Maybe you could remember the hell Christ went through that night and all the next day in order to make “forgiveness for sins (eternal life)” available to you. And maybe you could breathe a little prayer of thankfulness to God for what he's done.

Happy Passover,
Gabriel
Posted by Gabriel at 11:02 AM No comments: 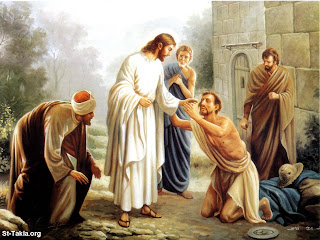 I must confess I wrote last week's post mainly to set you up for the awesome truth I now wish to reveal to you; thus, I desired for you to possess ironclad proof one of Jesus’ miracles, as recorded in the Bible, had meaning (or a message) behind it.  Logical deduction should then tell you the "feeding of the 5,000" could not have been the only miracle Jesus performed with an intent to also teach people something.
In the Gospels, you will encounter a running theme of Jesus healing people on the Sabbath day.  You’d almost think he desired to make people whole on that day more than any other.  Well, if you’ve read my book, it probably just hit you … HE DID! Because EVERY ONE of those miracles was heralding the exciting prophetic message that it would be at the start of mankind’s 7th millennial day on Earth (year 6,000) when God would “make whole” ALL the raptured righteous as they received their new glorified bodies!!!
Yes, on THAT day (known as the Lord’s Day, or the Sabbath Day) the lame will leap, the dumb will speak, the blind will see, and the deaf will hear!  Hallelujah!!!  It is what ALL of planet Earth has been waiting for ever since the fall of Adam & Eve in the Garden of Eden, the regeneration of planet Earth back into its rightful glorious paradise and the final redemption of mankind’s souls back into their painless, tearless, and labor-less bodies!  Oh, the INCREDIBLE and AWESOME meaning behind Christ’s Sabbath day miracles is breathtaking to perceive.
And yet, here’s the shocking and sad irony behind it all; it was largely because of Jesus’ Sabbath day miracles that the established church leaders of his day utterly DESPISED him and sought to kill him!  Isn’t it startling, the blindness 'church' leaders can be in?

Approximately 909 Weeks (Sabbaths) Remaining Till Christ's Return!
Posted by Gabriel at 10:58 AM 5 comments:

Did Christ's Miracles have Meaning? 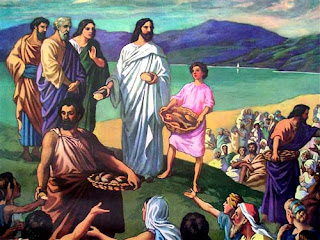 Most people think God performed miracles through Jesus just to show (or help prove to) people that he was indeed of Him.  While this is definitely true, they were in fact a WHOLE lot more! Amazingly, most of the miracles Jesus performed (at least the ones God intended to be recorded in the Gospels) had a message behind them.  In other words, they were intended to teach people something.
Take for instance, the miracle of the ‘feeding of the 5,000’ … the people who were fed came looking for Jesus the next day, but Jesus realized WHY they came looking for him and rebuked them for not understanding his miracle the previous day, “Ye seek me, not because ye SAW the miracles, but because ye did eat of the loaves, and were filled” (John 6:26).  The English word “saw” was translated from the original Greek word “eidō” meaning: to understand; to recognize, realize, to come to know.
Jesus then explained the meaning behind his miracle to them, “Labour not for the meat which perisheth, but for that meat which endureth unto everlasting life” (John 6:27).  Ah, do you get it?  The people were all pumped up because Christ had provided them with food to eat the previous day, and THAT is why they came looking for him the next day.  They had failed to recognize the meaning behind Christ’s miracle, which was shouting (and I’m paraphrasing), “Food is just dirt (materialistic), thus it is nearly worthless, and I’m going to prove it to you by showing you how easily I can provide you with it (bring it into being) right now.  Rather, I want you to desire GOD’S WORDS!  Hunger and thirst for THEM!  For that is the real, valuable, spiritual food, that if you eat it (DO IT) will sustain your soul forever (obtain you eternal life)!”
See, Jesus possessed those “life-giving” words, and he spoke them continually: They are the WORDS of GOD (Love), teaching people to obey the 10 Love Commandments.  This is what Jesus wished the people he had fed the previous day were now ‘seeking him’ to hear. But it just wasn’t so!  How about you?

Blessings to you in Christ Jesus,
Gabriel