Loose Him and Let Him Go!!! 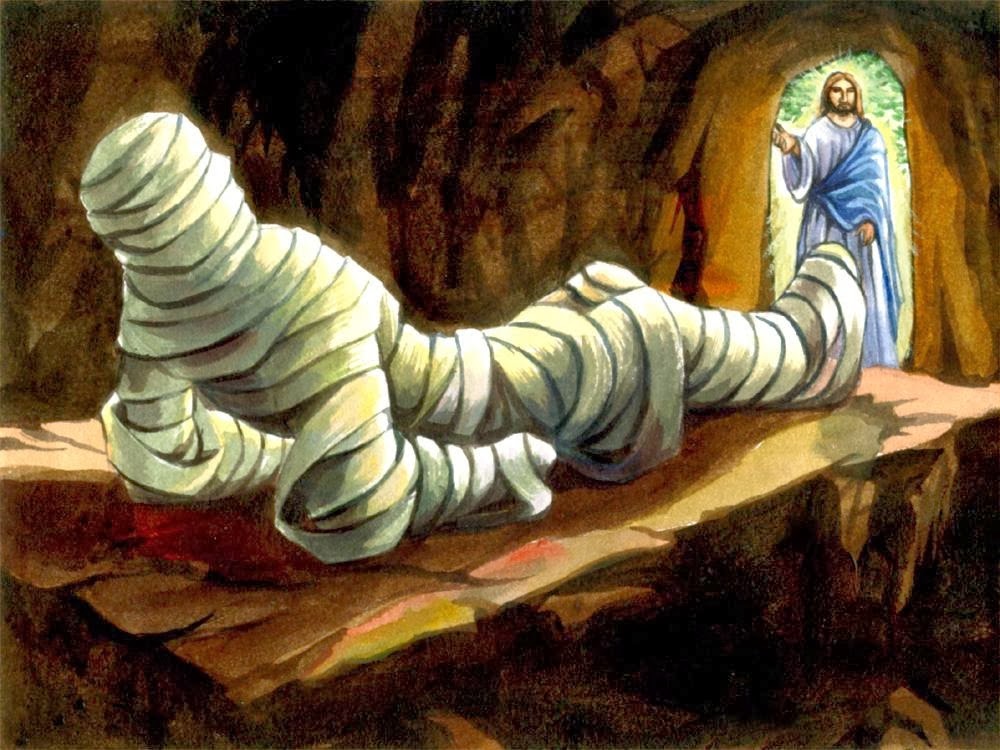 Recently I finished creating a movie entitled “2028 END” based upon the book I wrote “Undeniable Biblical Proof Jesus Christ Will Return to Planet Earth Exactly 2,000 Years After the Year of His Death”.  In both the movie and the book, I explain how the Israelite’s deliverance story through Moses was really a real-life parable designed and controlled by God to be a prophetic picture of mankind’s deliverance story from sin & death through a Messiah, Christ Jesus our Lord.

The famous line from Moses in the story is … “Let my people go!”  But do you understand the full PROPHETIC implication behind those words?  Every time Moses spoke them to Pharaoh it was as if the invisible spirit world ripped open, and we were seeing and hearing Jesus authoritatively commanding Lucifer, “Satan, let my children (mankind’s souls) go!” And eventually, God worked through Moses’ outstretched arms at the RED sea, like Jesus’ outstretched arms on the BLOODY RED cross, and in both cases the captives were set free and the enemy destroyed!  Praise be to God!

But now, I also speak in the movie and book about the story of Lazarus being raised from the dead.  This miraculous story was also a prophetic picture of the victory Jesus would win over Satan (for mankind’s souls) while dying on the cross.  The moment Jesus’ sinless sacrificial death became a reality, mankind had (an opportunity for) life, because Jesus’ death became the payment price for sin.  In other words, the "power of death" Satan held over mankind's souls was now gone, rendering him effectively powerless!  Therefore, Jesus “raising Lazarus from the dead” was also a picture of Satan being destroyed!

So, what did Jesus say when Lazarus walked out of the tomb still wrapped in his (bondage) grave clothes? He turned and said, “Loose him, and LET HIM GO!”  Ah, do you see it?  These words had the same spiritual implication as Moses’ words to Pharaoh, “Let my people GO!” Truly, Jesus was the prophet “like unto Moses” (Deuteronomy 18:15-19), and his words here were making that connection once again. 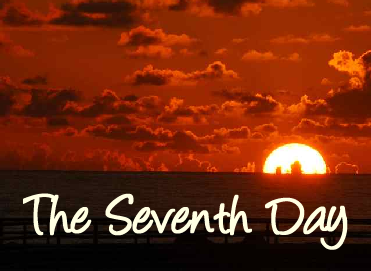 A week ago, Thursday February 13, I uploaded the new movie “2028 END” to YouTube, and it’s been doing very well. The movie reveals the many things God prophesied in His 7 Day Creation story, including the “time” of the “end”!  Many people are fascinated to learn all God prophesied in the first chapter of Genesis (6 Creation Day narrative) and the first three verses of chapter 2 (Day 7 narrative).  Today, I want to mention something else God tacitly prophesied in Day 7.

After Day 7’s thousand years are over, God’s Word prophesies this: “Satan shall be loosed out of his prison, and shall go out to deceive the nations which are in the four quarters of the earth, God and Magog, to gather them together to battle: the number of whom is as the sand of the sea.  And they went up on the breadth of the earth, and compassed the camp of the saints about, and the beloved city: and fire came down from God out of heaven, and devoured them.  And the devil that deceived them was cast into the lake of fire and brimstone, where the beast and the false prophet are, and shall be tormented day and night for ever and ever” (Revelation 20:7-10).

Furthermore, the Bible confirms Christ’s glorious 7th Day Sabbath Kingdom will continue on forever: “And the seventh angel sounded: and there were great voices in heaven, saying, The Kingdoms of this world are become the kingdoms of our Lord, and of his Christ; and he shall reign for ever and ever” (Revelation 11:15).  Yes, unbeknownst to most people living today, the “timing” of God’s WHOLE PLAN for planet Earth was laid out from the beginning of Creation.  Including the fact that the beautiful, restful Sabbath Day would be eternal! Hallelujah to the Lamb of God!

Approximately 760 Weeks (Sabbaths) Remaining Till Christ's Return!
Posted by Gabriel at 10:20 AM No comments: 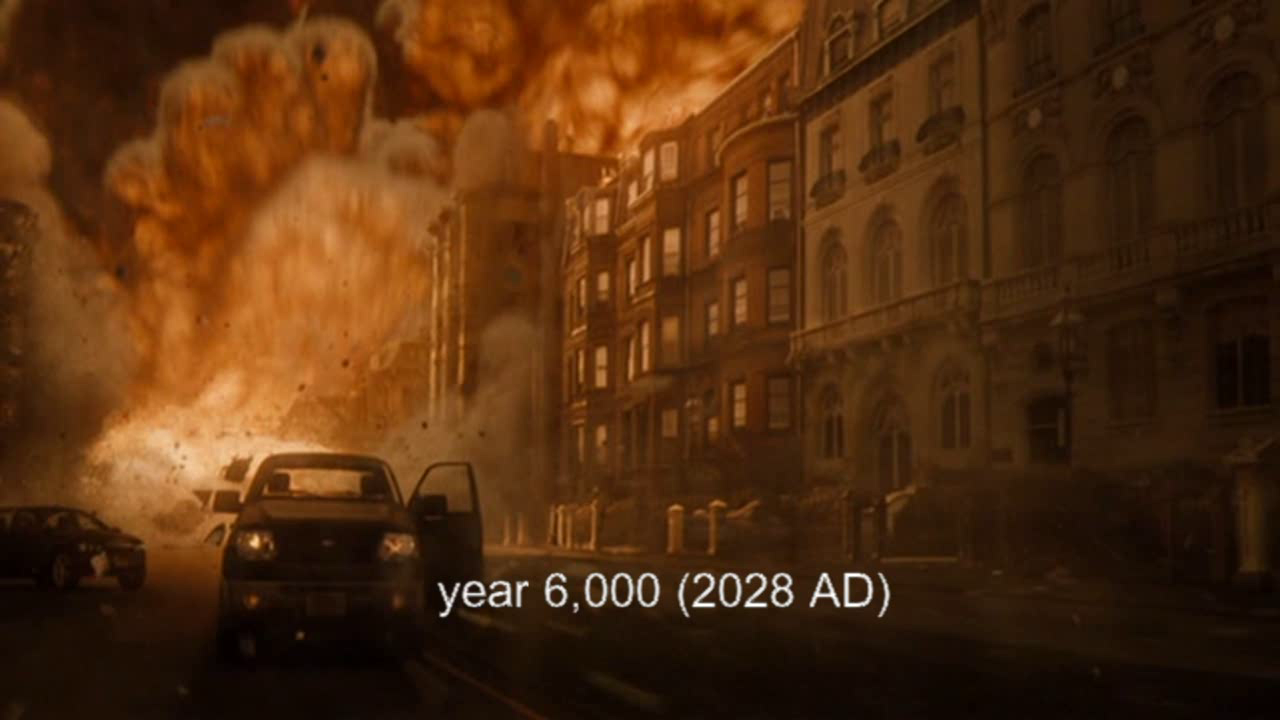 Six months.  That’s how long it’s been. Six months I’ve worked indefatigably, creating a movie based upon the book I wrote “Undeniable Biblical Proof Jesus Christ Will Return to Planet Earth Exactly 2,000 Years After the Year of His Death”.  And last night, around midnight, I uploaded the final version of the movie to Youtube for ALL the world to see, hear, and understand!

The title of the movie is … “2028 END”.  If you can find the courage to set aside your preconceived notions and what you THINK you know about God’s Word, and humbly watch the movie with an open heart, I know you will be Truly blessed!  But be forewarned, the movie’s truths are not taught in today’s church world!  So you will shocked.  You will be dumbfounded.  But you will be blessed nonetheless!  Here’s to you and yours, and the world forever learning the miraculous deeds of God!

Seeing the movie “2028 END” is like having the privileged position of being a fly on the wall in the throne room of heaven, eavesdropping in today on a conversation taking place between God the Father and His son Jesus Christ.  Jesus asks, “Will it be much longer Father, I’m ready to embrace my bride!”  What unfolds next will have people talking about this movie LONG after it’s over!

God begins explaining how He told the End from the Beginning by utilizing 7 Days in the Creation event, how EACH of those 24 hour Creation Days FORETOLD of a FUTURE 1,000 year period on planet Earth, and how they EACH contained prophecy about that particular millennium.  As He talks, the heavens continually rip back, and we are taken back in time to watch the exciting fulfillment action!  As the evidence builds, the shocking truth becomes clear … Jesus Christ will return during year 2028 AD, making a fiery end to this world!

Blessings and spiritual understanding to ALL! 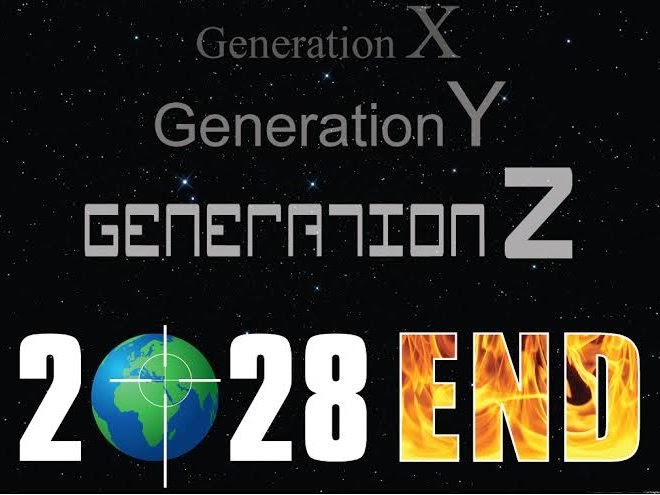 Most people have heard the generational terms X, Y, & Z used in mainstream media – Gen X being the most common.  I was born in the 1970’s and around my teenage years I came to the realization that I was part of Gen X.  I remember wondering why it was called "X" (the third last letter of the alphabet) as they’d soon be out of letters to use!  I discussed the matter with a relative, and I asked him, "What happens after Gen’s Y & Z are born, what’s next?  There are no letters after Z, so does that mean the end of generations?  The END of the world!"  He replied, "They’ll probably start using X1, Y1, Z1, and then X2, Y2, Z2, and so on."  That sounded plausible to me at the time, but I wasn’t completely convinced.

Then, a few months ago, I heard Gen X AND Gen Y mentioned on the radio.  I thought, “Wow, they’re talking about X and Y, and soon Z!  Could “Z” wind up being the final generation before the end of the world?  I should research more about this system and see what it’s all about.”  But of course, I got tied up and forgot.  But then a couple of days ago I flipped on the TV and the first thing that popped in front of my eyes was a talk show interviewing a young lady discussing Gen Y!  Immediately I took interest and learned this lady was Katherine Schwarzenegger, daughter of Arnold Schwarzenegger (Actor, former Governor of California), and that she is a Generation Y Journalist.  So, FINALLY, I went online and researched this issue, because I was curious to know when Gen's X, Y, & Z began and ended, who came up with the system, and why they didn’t start with letter "A" to give more time to use the system.  Well, Wikipedia says that there is no definitive starting and ending year for each, but it is generally agreed upon that X is from the 1960’s to 80’s, Y from the 80’s to 2000’s, and Z from the mid 90’s OR mid 2000’s to the present day, “this is the generation that is currently being born.”

Wow, I was stunned!  Since the pattern suggests a 20 to 25 year range for each generation, this puts Gen Z coming to an end in the mid to late 2020s!!!  Now, isn’t that interesting?  That PERFECTLY aligns with an ending date of AD 2028, the timeframe around which Gabriel’s book declares Jesus will return to planet Earth to rapture up the saints and destroy the whole planet with fire.  So, it appears this alphabetical generational naming system is prophetic in nature after all, like a 3, 2, 1 clock counting down to the end!  Was the person who came up with this system a prophet?  Or was it all just inspired by God for man to popularize such a spot on system to describe the final generations?  Only God knows!

No folks, there will NOT be a generation after Z called X1, Z1 or anything else … it will simply be THE END!  Generations X, Y, and Z, are becoming increasingly more evil.  As world population explodes and global connecting technology advances, Satan is having a heyday spreading atheism, evolution, hatred, violence, homosexuality, pornography, abortion, and every other kind of evil.  And as a result, today’s generations are becoming less religious, less moral, and less loving.  But like a runaway train picking up speed, heading for a hairpin curve, God is about to step into time and bring a fiery crash STOP to it all!  Yes, I am 100% sure, God has opened my eyes to the prophetic, countdown-like nature of mankind’s last days Gen’s X, Y, & Z naming system ALL to further support and prove the message contained in His book "Undeniable Biblical Proof Jesus Christ Will Return To Planet Earth Exactly 2,000 Years After The Year Of His Death (AD 28)!"

Have a blessed Sabbath everybody!