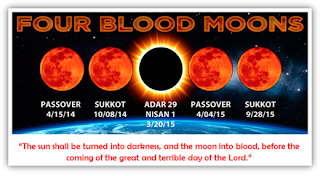 Have you heard about the so-called “tetrad of lunar eclipses” to occur on Jewish Holy Days in the next two years (2014-2105) and how this is to be a “sign from God” of something significant coming to Israel?  This “theory” was conceived by a pastor named Mark Biltz, afterwhich he wrote a book about it called “Blood Moons: Decoding the Imminent Heavenly Signs”.  Pastor John Hagee then latched onto this idea and used his powerful TV pulpit position to spread the book’s message far and wide.  The problem is … the “theory” is VERY WEAK!!!

I’ve been wanting to blog about this for some time now (ever since first coming across it last year) to point out how “thin” the theory’s assertion is!  Well, that time has finally come, for this past week I ran across a YouTube video from a man who does a great job THOROUGHLY debunking the theory!  So, instead of me writing all about it …I’m simply going to link his video below, so in a few short minutes you can absorb the TRUTH (or lack of) of this matter.

Folks, you have to pay attention to what you listen to these days, because there are people in the “ministry” who are desperate to take your money every chance they get!!!  They will write books on just about anything they can come up with to interest you and take your money.  So please be careful!  Give your hard earned money to your neighbor in need, and not some covetous preacher!  Are “significant things” going to happen to in the next two years, or within the next 6 years?  Most likely, but it’s NOT going to be because of a tetrad of blood moons occurring on Jewish Holy Days in the next 2 years!

Approximately 767 Weeks (Sabbaths) Remaining Till Christ's Return!
Posted by Gabriel at 10:12 AM