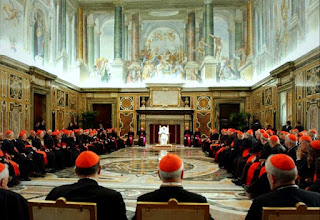 A vote.  A puff of white smoke.  Soon will be chose a new pope!  At 85 years old, Joseph Ratzinger (Pope Benedict XVI) is still alive, but oddly enough will RESIGN his pontiff position this Thursday, February 28, citing “incapacity to adequately fulfill the ministry entrusted to me” as his reason. It’s been almost 600 years since a pope has willingly stepped-down to end his reign.  Very strange.  But this act will drive the world’s 117 cardinals to descend upon Rome, enter the Vatican, and convene in an AD 2013 Papal conclave seeking a 2/3 majority vote to elect a new pope.

What is the significance of this new pope?  It all goes back to a 12th century seer, St. Malachy, who in a vision saw 112 popes from his day to Judgment Day (Christ’s return): This is known as The Prophecy of the Popes.  Where are we on this list?  The new pope will be number 112!!!  The last pope!!!  Malachy wrote this concerning him:

“During the final persecution the seat of the holy roman church will be occupied by Peter the Roman, who will feed the sheep in many tribulations, after which the seven hilled city will be destroyed, and the terrible Judge will judge His people … THE END”.


Could it be true?  Was St. Malachy divinely inspired, or perhaps … satanically inspired?  I don’t know.  But what did he mean by referring to the last pope as “Peter the Roman”?  In Catholicism, all popes are seen as apostolic successors of Saint Peter; thus they sit in the “Seat of Peter” and reign from “.  Consequently, the interpretation could be that vague, or it could be much more specific!  How?  Well, of the top 10 contenders for new pope, two have “Peter” in their names: Cardinal Peter Turkson of (age 64), and Cardinal Tarcisio Pietro (Peter) Evasio Bertone of (age 78).

Here’s the bottom line; we have roughly 15 years left until Christ returns at the end of the Antichrist’s reign (around AD 2028) as prophesied in my book “Undeniable Biblical Proof Jesus Christ Will Return To Planet Earth Exactly 2,000 Years After The Year Of His Death”.  Therefore, the new pope only needs to reign this long – possibly shorter, depending on when the 7-hilled city of is destroyed – to fulfill St. Malachy’s prophecy.  This is easily doable!  God’s end time events are heating up, my friend.  Like a masterful chess player, God is placing people in position to fulfill His Word.  It’s time, like none other, to get right with God before this thing fires up!


Wikipedia: "Prophecy of the Popes"
Buzzfeed: "The 10 Men who would be Pope"
CNN: "Longest-reigning Popes"
CNN: "Too tired to go on, Pope Benedict resigns"

Approximately 812 Weeks (Sabbaths) Remaining Till Christ's Return!
Posted by Gabriel at 10:25 AM 3 comments: 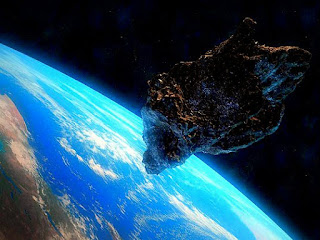 In our Solar System, asteroids are small rocky bodies that orbit the sun, ranging in size from 600 miles across to tiny dust particles; a meteoroid is an asteroid on a collision course with Earth; a meteor is an asteroid that enters Earth’s atmosphere, appearing as a streak of light (falling star); and a meteorite is a meteor that survives the violent frictional heating of Earth’s atmosphere and strikes Earth’s surface.

This past week scientists have been keeping a watchful eye on Asteroid 2012 DA14, which will make the closest pass (within 18 miles!) of Earth’s surface in recorded history today February 15, 2013.  But here’s the stranger news; as the world was focused on this coming asteroid, earlier today a rare 10 ton meteor streaked over ’s Ural Mountains at supersonic speed and exploded over the region, injuring hundreds of people.  The explosion’s intense bright light and multiple booms had people running for cover and screaming “The world is ending!”  But here now is the even STRANGER news about today’s meteor: “Interior Ministry spokeman Vadim Kolesnikov said that about 600 square meters of a roof at a zinc factory had collapsed.”

In the book I wrote, I provide extensive Biblical evidence that Jesus Christ’s 2nd Coming will occur during Earth’s 6,000th year, and that Earth’s surface will be destroyed in a global firestorm.  Did God just confirm ALL this (even the time!), yet again, with today’s meteor?  I’ll leave you with the words I wrote in my book on page 394:

So, what does the “STONE killing Goliath” and the “STONE demolishing Nebuchadnezzar’s man-image” foretell?  Well, it is evident throughout Scripture that Jesus Christ is known as the stone: “For Jesus the Messiah is (the one referred to in the Scriptures when they speak of) a ‘STONE discarded by the builders which became the capstone of the arch” (Acts 4:11, Living Bible). Subsequently, the “stone” symbolizes Christ annihilating Lucifer’s reign on Earth in the above stories.  But I believe there could be more to it, for it is likely that these divine prophetic stories will be fulfilled even more LITERALLY at Jesus 2nd Coming by a massive meteorite (“stone cut out without hands”) violently striking Earth and setting its entire surface on FIRE!!!  Listen to “The Revelation”: “And the seventh angel poured out his vial into the air: and there came a great voice out of the temple of heaven, from the throne, saying, IT IS DONE.  And there were voices, and thunders, and lightnings: and there was a GREAT EARTHQUAKE, such as was not since men were upon the earth, so mighty an earthquake … the cities of the nations fell … every island fled away, and the mountans were not found.  And there fell upon men a great hail out of heaven, every STONE about the wight of a talent” (The Revelation 16: 17-21). Friend, this sounds like a detailed description of the result of a massive meteorite colliding with planet Earth!  And that is all I am going to say about that.

Approximately 813 Weeks (Sabbaths) Remaining Till Christ's Return!
Posted by Gabriel at 11:57 AM 11 comments: 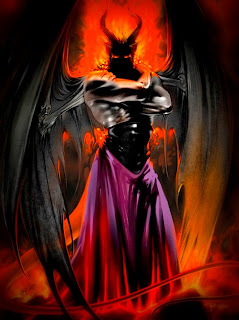 Friend, Satan absolutely knows planet Earth is very young.  Why?  Because he was here from the very beginning!  He’s an eye-witness!  In fact, it wouldn’t surprise me one bit if he and his demons haven’t been counting, keeping track of every year since Creation.  They almost certainly knew Jesus Christ DIED on the cross during Earth’s 4,000 year long before God revealed it through me.  Additionally, they have listened to every prophet of God speak about God’s 7 Creation Day (7,000 year) master time plan down throughout the course of history – and there have been many!  It all adds up to Satan and his imps absolutely, positively, KNOWING mankind has only about 15 years left until the return of Jesus Christ!

So, what do you think Satan thinks of today's scientist’s old-age Earth theories?  He LOVES them!  Why?  Because he loves a lie!  In fact, it wouldn’t surprise me one bit if he and his demons weren’t the ones behind influencing certain men into thinking this way, and then propagating the Big Lie everywhere today.

But why?  Why would Satan want to do this?  It’s simple really.  He hates you so much, and wants to see you in eternal torture with him so badly, that he doesn’t want you to know WHEN the END is coming!  He doesn’t want you to know when God’s Day of Judgment will arrive, because this would give you extra incentive to be ready (living righteously) before that time arrives!  Listen, it’s like this; if I hated you and wanted to see you destroyed, and I knew a massive F5 tornado was heading your way and would be at your house in 25 minutes, I would NOT want you to know ANYTHING about it!  I would keep you completely distracted and deceived until the very moment the howling wind was at your door.  And then I would watch in enjoyment as you perish, relishing your every terrified, contorted expression and final screams.  Sick, huh?  Well, that’s Satan!

Approximately 814 Weeks (Sabbaths) Remaining Till Christ's Return!
Posted by Gabriel at 10:33 AM No comments:

But What About The Dinosaurs? 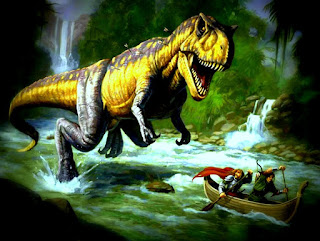 Have you ever heard the question – “But what about the dinosaurs?” – when explaining to someone how the Bible (God’s Word) proclaims planet Earth is around 6,000 years old?  Goodness, it is amazing what relentless propaganda can do to the people of the world.  Adolph Hitler coined the term “The Big Lie” and explained it as follows in his book Mein Kampf:

All this was inspired by the principle – which is quite true within itself – that in the big lie there is always a certain force of credibility; because the broad masses of a nation are always more easily corrupted in the deeper strata of their emotional nature than consciously or voluntarily; and thus in the primitive simplicity of their minds they more readily fall victims to the big lie than the small lie, since they themselves often tell small lies in little matters but would be ashamed to resort to large-scale falsehoods.  It would never come into their heads to fabricate colossal untruths, and they would not believe that others could have the impudence to distort the truth so infamously.  Even though the facts which prove this to be so may be brought clearly to their minds, they will still doubt and waver and will continue to think that there may be some other explanation.  For the grossly impudent lie always leaves traces behind it, even after it has been nailed down, a fact which is known to all expert liars in this world and to all who conspire together in the art of lying.

Richard Belzer later defined Hitler’s The Big Lie like this: “If you tell a lie that’s big enough, and you tell it often enough, people will believe you are telling the truth, even when what you are saying is total crap.”  Friend, the world has fallen prey to a Big Lie!  What is it?  It is the ubiquitously trumpeted notion that Planet Earth is billions of years old and that dinosaurs became extinct 65 million years ago!  Even now, me calling this man-made speculation a Big Lie, has some of you getting hot around the collar, doesn’t it?  The lie has been told long enough and wide enough in every form of popular culture that for the most part … the whole world believes it to be true!  It really is quite remarkable how a HUGE lie can become “truth” in people’s heads, even when the facts clearly suggest otherwise.

I happened across a wonderful video this past week about “dinosaurs”.  It’s nearly an hour long, but it’s so informative and interesting that you scarcely notice the time going by.  I pray you will find the time to watch and listen, put on your “thinking cap”, and allow the truth on this matter to reclaim your spirit.  Exposing this Big Lie is very important to me, because it has sadly closed many people’s hearts from even beginning to hear the Biblically-based prophetic message God has given me to herald to the world about the “timing” of Christ’s soon coming return.  So, with respect to the age of Earth, let’s put to rest the question … “But what about the dinosaurs?”

Approximately 815 Weeks (Sabbaths) Remaining Till Christ's Return!
Posted by Gabriel at 10:17 AM 3 comments: