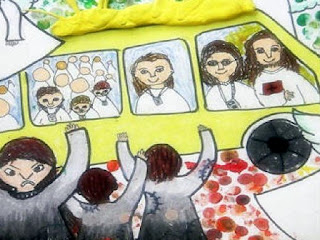 In the book I wrote, I reveal the secret and shocking truths (as given to me by God) behind the stories of "Noah and the Flood" & "Lot and the destruction of and .  Amazingly, they are both UNFULFILLED prophetic stories concerning the events that will transpire during Jesus Christ’s Second Coming.  In other words, during Christ’s return, those two Old Testament stories’ prophecies (over 4,000 years old!) will finally be fulfilled!

Briefly, in them, ONE righteous house of people (Noah's house & Lot's house, respectively) is saved ABOVE the destruction of ALL unrighteous others.  This will be the way it is on Earth during Christ’s return – one righteous house of people (the “house of Christ” Hebrews 3:6) will be saved from destruction by rising up into the air to meet the Lord, while a world of ungodly people are simultaneously destroyed by fire.

This past week I received an email from a dear brother, informing me of a video about a young Korean girl named Sarang, whom God recently gave a vision to of Earth’s last day, meaning the day of Jesus Christ’s return to Earth.  Please take the time to watch the video (linked below) and notice how her vision confirms the things God has told me about the stories of Noah and .

A Very Present Help in Trouble 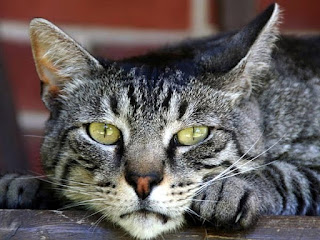 This past Sunday I was helping my fiancé, Jerrie Lynn, move her and her mom’s clothes from , , down here to where I live in .  In Indiana, we had JL’s Montero packed completely full of clothes and shoes, but she also wanted to bring the cat, Emily.  So she loaded her up in a cat carrier and put her on her lap in the passenger seat, as I started out driving.  Well, after a few hours I got tired of driving, and we switched up – JL drove while I held the cat.  And this is where the fun began!

All of a sudden, I felt my right leg getting really warm!  Not having a clue what it was, I looked down and saw my wet jeans – ugghh, PEE!  LoL  Em peed on me!  Poor liddle girl.  I said, “Just pull over somewhere, hun, (quick if you can! … lol) and we’ll get a bath towel or something so I can dry off, and then I’ll place the towel on my lap in case she does it again. So JL pulled off the next exit and we instantly saw a CVS drugstore, to which we pulled up in the parking lot.

Jerrie Lynn jumped out (still giggling at me!) and headed for the store, but then she noticed something yellow and soft hanging out of the store’s outside trashcan.  What was that?  It was a big fluffy yellow towel!  Wow, it was hanging right there, like it was just waiting for our emergency.  And it was perfect for the job … a little dirty, but like I wasn’t?  LoL

The moral of the story: “God is our refuge and strength, a VERY PRESENT HELP in trouble.  Therefore we will not fear, though the Earth be removed, and though the mountains be carried into the midst of the sea” (Psalms 46:1-2).  Friend, the world is heading for some seriously troublesome times.  The Antichrist will be here in about 9 years, and Jesus in about 16 at the end of the Great Tribulation.  But if you’re living your life in accordance to God’s 10 Love Commandments, I assure you … God will be right there, instantly, to help when your time of trouble arrives. 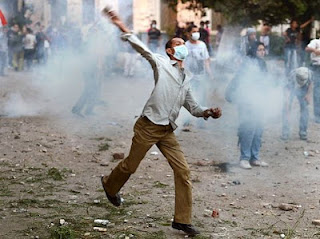 The time of Christ’s brutal death, glorious resurrection, and triumphant ascension back to heaven was drawing nigh, so Jesus and his disciples were journeying steadfastly towards the place it would all go down  –  .  One day during their traveling, Jesus sent several messengers ahead to make reservations for them in a Samaritan village.  (Note: The Jews called Samaritans “half-breeds,” thus, the Samaritans hated the Jews.)  Well, when the folks from learned this group was on their way to (the Jews’ city), they denied them lodging.  It was a clear case of hatred and discrimination between human beings.

James and John (two of Christ’s disciples) soon got word of this and said: “Lord, wilt thou that we command fire to come down from heaven, and consume them, even as Elijah did?” (Luke 9:54).  Jesus wheeled around to them and rebuked: “Ye know not what manner of spirit ye are of.  For the Son of man is not come to destroy men’s lives, but to save them” (Luke 9:55).  Humiliating.

Today, we have human beings on planet Earth with this same murderous spirit, all because someone made a movie about an issue that offended them.  Are you kidding me?  And to top it all off … they say their hate-filled, murderous heart is vindicated by their religion. Really!  I don’t know what “religion” this is, but I assure you it is NOT the religion of the One True Creator God and His Christ, which teaches: “Pure religion and undefiled before God and the Father is this, To visit the fatherless and widows in their affliction, and to keep himself unspotted from the world” (James 1:27).

You who murder your fellow man in the name of a “religion” … you’re time is running out. Your murderous heart is not from God, it is from Satan!  And NO unrepentant murderer will EVER receive eternal life: “Whosoever hateth his brother is a murderer: and ye know that no murderer hath eternal life abiding in him” (I John 3:15).  Repent now, before hell is your eternal reward.  Choose the religion of Love.  Choose Life!  For now you know “what manner of spirit ye are of”. 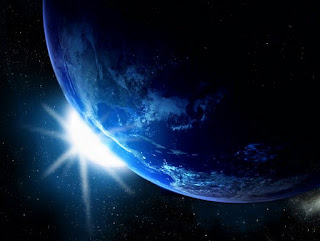 In Part 1 of this blog I referenced two passages of Scripture, both spoken by Jesus, proving he believed (and still does!) in a young Earth  –  specifically, an Earth that is only now approaching 6,000 years old.  Today, I want to say a few more words about one of those passages to help you better grasp it. Why?  Because “believing the Earth is young” is the starting point for a soul to be able to receive the prophetic “timing” revelation (concerning Christ’s return) God has given me to proclaim to the world.  Sadly, in these final days, the satanic deception of an “old Earth” is so pervasive in our culture that many (if not most!) people’s hearts are completely closed off to even begin hearing this message.  (Truly, the Spirit of Antichrist has worked marvelously already “to think to change times” (Daniel 7:25) as the Bible said it would!)  Thus, it is VERY important to God & me that you understand Christ’s words in the Bible ABSOLUTELY PROVE he did NOT believe Earth was old!  After that, if you want to doubt Christ’s infallible words and believe fallible man, that is your prerogative.

Now listen, if one tries to add MORE time than six 24hr periods to the Creation event, one immediately begins to make Christ’s words untrue.  For example, consider the theory  –  the crazy theory!  –  that EACH Creation day was literally a 1,000 year period that God worked creating things.  Doing the math, this makes mankind first appear on Earth sometime during the world’s 5,000 to 6,000 year (day 6); and with Jesus speaking roughly 4,000 years after that … would he have been correct to say “mankind was on Earth from the BEGINNING of the CREATION”?  No way!  How about a 4.6 billion year old Earth, with mankind only here for the past 200,000 years?  Ludicrous!  Friend, there’s only ONE “timing scenario” that extracts the Truth out of Christ’s words: The entire World (including planet Earth) was created in 6 literal (24 hr) days, and this ALL was the “beginning of time”.  1 week (Creation week) with respect to 208,000 weeks (4,000 yrs x 52 weeks/yr) of history, would make Christ's words true: “God made them (mankind) male and female, from the BEGINNING of the CREATION.

Yes, friend, Jesus ABSOLUTELY KNOWS planet Earth is young  –  approaching 6,000 years old.  And you want to know who else does?  SATAN and his demons!!!  For they have been here since the beginning, too!!!  They have listened to many prophets of God speak about God's 7 Day (7,000 year) Plan throughout history.  This is why they languished to Jesus: “Art thou come hither to torment us BEFORE the TIME!” (Matthew 8:29).  Yes, they know the Truth on this issue!  How about you?

Can Jesus Return at Any Moment? 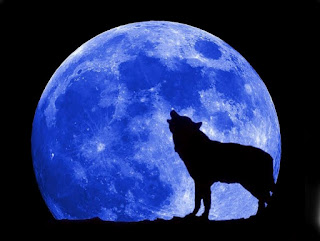 On the fourth day of Creation, God made the sun, moon, and stars and said, “Let them be for SIGNS, and for SEASONS, and for days, and years” (Genesis 1:14).  The word “signs” was translated from the Hebrew word ’ôt meaning: sign, mark, symbol, a signal or event that communicates.  The word “seasons” was translated from the Hebrew word mô’ēd meaning: Meeting, appointed time, designated time.  Thus, from the beginning of time, God declared His created celestial bodies – namely, the sun, moon, and stars – would act as visible indicators to mankind of WHEN He would meet with them!  What do you suppose these “Meetings" would be about?  Do you think they would be “significant events” in God’s plan for His newly created Earth and mankind on it? You better know it!

2,638 years (orbits of Earth around sun) later, God used the word mô’ēd for the second time when instituting 7 Feasts (Holydays) with the children of in the wilderness: “These are the Feasts of the LORD, even holy convocations (Meetings), which ye shall proclaim in their SEASONS” (Leviticus 23:4).  God commanded the Israelites to keep these 7 Feasts each year, each at an "appointed time" based on the moon’s cycle.  Even the Psalmist confirmed it: “He (God) appointed the moon for SEASONS (Appointed Times)” (Psalmist 104:19). This “seasons” was again the word mô’ēd.

Around 1,400 years later (in the first century AD) Jesus explained to his disciples, after his death and resurrection, his fulfillment of the first 3 Feasts (on their very days and times!). This secret and stunning prophetic information must have THRILLED the disciples – not to mention, cemented their faith in God! – for it is evident they spread the exciting knowledge to others … a few years later Paul wrote about the remaining unfulfilled Feasts: “In respect of an Holyday (Feasts), or of the new moon, or of the Sabbath days: which are a SHADOW (prophetic picture) of THINGS TO COME” (Colossians 2:16-17).  No doubt, the first century Christians understood what God’s 7 Feasts (Appointed Times) signified!

So, can Jesus return at ANY moment?  Not a chance!  His Second Coming will occur at the phase of a new moon, in the season of fall, in precise prophetic fulfillment of God’s fifth Feast – the Feast of Trumpets.  Can he return for YOU tonight?  Absolutely!  For any of us can die at any moment, and that would be the "time" he came for you, ready or not.  But concerning THE Second Coming … it is an unchangeable, immovable, set time by God the Father: Earth’s 6,000 year, Feast of Trumpets.

Approximately 837 Weeks (Sabbaths) Remaining Till Christ's Return!
Posted by Gabriel at 11:52 AM No comments: