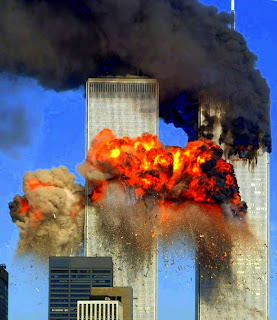 Last night I left the comment: “2028END d o t com.  Don’t miss it!!!” under a youtube video entitled "Why Syria is a Smokescreen for WWIII".  About an hour later I received a response: “2028  What happens on that date?” I wrote back: “The entire surface of planet Earth will burn with fire.  Everything will be destroyed, except one small house of righteous people, who will have rejected the Antichrist’s mark, will be raptured up into the air to meet Jesus Christ in the clouds, escaping the global inferno.”  About an hour later, the same person responded back with these shocking words: “Nostradamus wrote that a great war would start in , and last 7 and 20 years 2001-2028.”  And thus began my inquiry into this (unknown to me) matter!

My search soon led me to a wikipedia entry about a 1981 Nostradamus movie titled "The Man Who Saw Tomorrow".  And sure enough, the mysterious youtuber was correct! Wikipedia records the following about the movie’s predictions:


“A “King of Terror”, wearing a blue turban, described as “the terror of mankind”, would rise to power from Greater Arabia during the late 1990’s, wage war around the world and spread the influence of Islamic fundamentalism, along with decreasing the influence of Christianity.  Nostradamus claims that the “King of Terror” would form an alliance with the .  According to Nostradamus, the “King of Terror” and Russia would wage World War III against the West (United States, United Kingdom, and France) starting with a nuclear strike on New York City (“the sky will burn at 45 degrees, fire approaches the great new city”).  Nostradamus claims that World War III would last about 27 years, and the war would destroy cities and kill millions.  The “King of Terror” would be defeated.  After World War III, there will be a “peace of a thousand years”.


Well, on September 11, 2001 the sky burned above , and a global “war on terror” began, and it has not ceased since!  Who’s REALLY behind it all, only God knows. Nostradamus wrote “The war will last seven and twenty years” which would bring us to September 2028.  This is the same exact “time” God revealed to me in 2008 for the return of Jesus Christ at the very end of the Antichrist’s (King of Terror) terrible reign!  Friend, this “war on terror” is going to escalate into the greatest act of global terrorism this world has ever seen, compelling Jesus Christ to descend (return) from heaven to stop it!  And we only have 15 years left to witness it all!!!

Please help us "endure" till the end, Father,