Why Did Paul Call Himself “Chief of Sinners” 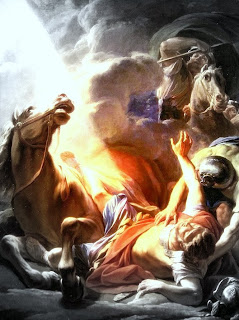 In his letter to Timothy, Paul said a seemingly strange thing: “This is a faithful saying, and worthy of all acceptation, that Christ Jesus came into the world to save sinners; of whom I AM CHIEF” (I Timothy 1:15).  What!?  The Apostle Paul!?  God’s hand-picked man!?  The chief of sinners!?  What did Paul mean by this?  Today, I often hear people take this verse completely out of context, misconstruing the meaning behind Paul’s words, and refer to themselves as “chief of sinners”.  So let’s shed some light on this today.

It’s really quite simple … Paul was talking about his PAST, not who he was currently!    Listen, before his conversion, when his name was Saul, Paul was going around putting good people of God to death! Now that’s doing GREAT evil, right?  Listen to him talk about his wicked former self: “And I persecuted this way unto the death, binding and delivering into prisons both men and women” (Acts 22:4).  Can you imagine literally KILLING people because you thought they weren’t living (doing) right, and then later find out you were wrong?  How terrible would YOU feel about yourself?

Well, this was Paul!  Even though currently living righteously (striving to live by God’s 10 Love Commandments) Paul could NEVER forget who he used to be!  And it was because of THIS (his past life) that Paul humbly considered himself the “chief of sinners”.  Listen to him lament about it: “For I am the least of the apostles, that am not meet to be called an apostle, because I persecuted the church of God” (I Corinthians 15:9).

So here’s my advice; if you have repented of your sins (meaning you currently strive to live by God’s 10 Love Commandments) don’t refer to yourself, in the present tense, as “chief of sinners”.  Do you understand?  That doesn’t make any sense, because you are not!  And most likely, in your past, you have not persecuted good loving people of God to death like Paul.  In other words, all things considered, it is wise to be humble, but these words from Paul should be left to Paul.

Approximately 789 Weeks (Sabbaths) Remaining Till Christ's Return!
Posted by Gabriel at 8:19 AM