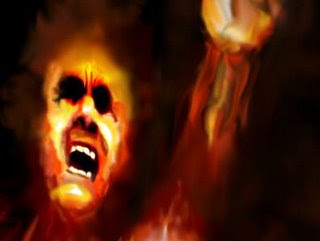 From the summer of 2010 to the summer of 2011, I worked extremely hard to create about a dozen YouTube videos which help deliver the amazing message God has given me about His Bible and the stories in it.  But shockingly to me, during the making of many of these videos God would perform miracles to confirm He was behind their message.  Then, over a year ago, God asked me to begin writing this blog and to make sure to write about EACH YouTube video on its one year anniversary and the miracle (if there was one) behind it.  Thus, I have been doing this faithfully with each video.  Well, on June 27, 2011 (two days ago, a year back) I uploaded a scary and sobering video entitled “Fear of God”.  There was NO miracle behind the video at the time of its creation, but SHOCKINGLY God has just performed a miracle TODAY while I wrote its (this) one year anniversary blog!

The video contains frightening images of the burning hot fires of hell and the sounds of people screaming in them.  So what miracle did God do today here in Nashville, Tennessee, where I created the "Fear of God" video over a year ago, and now sit and write about it?  He has controlled the outside air temperature to hit 109 degrees!!!  The hottest temperature EVER recorded here in Nashville, Tennessee, ON ANY DAY was 107 degrees, since records have been kept from the mid 1800’s!  In other words, we just obliterated the record!!!  Today, June 29, 2012, is now the HOTTEST DAY on record in Nashville, TN!!!  It's HOT as HELL out there folks!!!  And it is all happening while I sit here and write this (required by God) one year anniversary blog concerning the “Fear of God” video He led me to make!!! Don't miss watching the video linked below!

Listen to me friend, “fearing God” is almost a lost topic in today’s church world.  And do you know why?  It is because Satan and his demonic cohorts have so twisted, altered, and misconstrued the meaning of God’s Holy Scriptures, that they have now invented deadly and damnable doctrines in the church world that teach, “There’s no need for you to fear God anymore, because you don’t have to be good to go to heaven! You’re saved! You’re on your way to heaven because of this or that, but NOT because of your doing good (obeying the 10 love commandments).”  Do you see?  Once you believe this lie, that you are on your way to heaven because of something OTHER than having to live righteously by “keeping God’s 10 Love Commandments”, you will lose ALL fear of God!  Think about it!  And don’t think Satan doesn’t know this!

Yes, a real, true, lifestyle-altering, do-good propelling “fear of God” is almost non-existent in the congregants of today’s church world.  But make no mistake about it … NO ONE will go to heaven who lives in willful sin!  You may hate my words if you so desire, but God has once again confirmed He is behind them by performing today’s hottest temperature ever “hot as hell” miracle here where I live, stamping His seal of approval on my creation of the "Fear of God" video!  Thus, I cry out with new found passion and concern for your eternal well-being, “Fear God, and Keep His (love) Commandments ... NOW!”

Watch my video "Fear of God"
Watch video "Pictures of HELL, an artist draws what she saw in Hell"
Read "Nashville's 109 is Hottest Day Ever"
Comprehensive list of "God's 10LC"