Where Will You Be When the World Stops Turning? 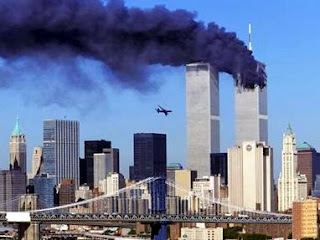 It was a clear Tuesday in Nashville Tennessee, and I was doing carpentry work in a big house right beside Alan Jackson’s 25,000 square feet home off of Moran road.  They were the only two houses in sight in a huge expanse of beautiful green scenery.  In my heart I was far from God, and it was morning time September 11, 2001.  Suddenly, my country radio station was interrupted by a strange report of a plane hitting one of the World Trade Center Twin Towers in New York City.  “Well, that’s weird,” I thought.  Then soon after the report came through that another one had hit the other Tower!  Then the Pentagon!  Then fear hit me, “Are we being attacked?  What’s happening?  How bad is this going to get?”  Sadly, I don’t remember once thinking about or talking to God through the whole ordeal.

But oh what a difference 10 years can make in a life!  Here it is two days before the 10 year anniversary of September 11, 2001 (this Sunday) and yet it feels like just yesterday when the Towers collapsed.  Goodness, how time flies!  And now God is my whole life, and He has me positioned here on the internet delivering a prophetic message to the world for Him that reveals when His son Jesus Christ’s return to Earth will be “even at the doors” (Matthew 24:33).  It hit me the other day that September 2001 was precisely 20 years from September 2021, which is the month and year God has shown me is likely the time the final 7 years (Antichrist’s reign) in this age of sin will commence on Earth.  And then September 2028 during Rosh Hashanah (Feast of Trumpets) is likely the time of Jesus Christ’s rapturous and fiery Second Coming!  If you’ve read my book, you know the significance of the number “20” to God; it's His Biblical number of redemption.  So it is interesting to me that America’s greatest terror attack happened precisely 20 years from the very possible start of the world’s greatest time of terror!

Folks, these next 10 years are going to FLY bye.  Consider the length of time from September 11, 2001 till right now, and then realize that same amount of time is all that’s left till September of 2021 and the Antichrist coming onto the world scene!  I don’t know where you are in your heart towards God, but I feel an awful sense of urgency in mine for the people of the world.  This “thing” is almost over, folks!  The “end” is almost here!  God’s 6 Day (6,000 year) plan is close to completion, and the door to the Kingdom of God will soon be shut!  I’m begging you, if your heart is far from God ... NOW is the time to turn your face towards Him.  If you haven’t talked to Him in awhile ... NOW is the time to begin!  If you’re chasing this perishing world, I implore you to start chasing the eternal God.

Listen, everything on Earth is going to burn in a Flood of Fire in about 17 years!  Peter wrote; “But the day of the Lord will come as a thief in the night; in the which the heavens shall pass away with a great noise, and the elements shall melt with fervent heat, the earth also and the works that are therein shall be burned up. Seeing then that all these things shall be dissolved, what manner of persons ought ye to be in all holy conversation and godliness” (II Peter 3:10-11).  Do you understand?  “Holy conversation and Godliness” means “to obey God’s 10 Love Commandments”.  In the end, that’s ALL that’s going to count in your life — i.e. the selfless love you showed God and others.  If you did, you’ll live; if you didn’t, you’ll perish!  Alan Jackson wrote a reflective song about September 11, 2001 called “Where Were You When the World Stopped Turning” but I’m asking you now, approximately 17 years ahead of time, "Where WILL you BE when the world stops turning?"