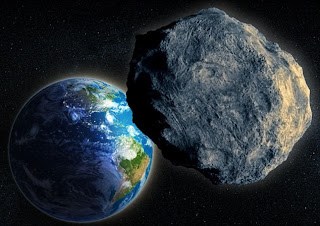 After last month’s scary meteor explosion incident in , asteroids were up for discussion again this week in the US Senate.  The brass tax – right now, as of today, mankind has almost no chance of stopping a massive asteroid from striking planet Earth if one is on the way!  The sheer physics of the cosmos make it nearly impossible.

Shockingly, scientists told the senate a one kilometer (0.62 mile) or larger diameter asteroid can strike Earth with a frequency of every few thousands years!  “What would an asteroid that is a kilometer in diameter do if it hit the earth?” Senator Bill Nelson asked.  “That is likely to end human civilization!” replied former astronaut Ed Lu, who is now head of the asteroid hunting B612 Foundation.

It was a stone “cut out without hands” that Nebuchadnezzar saw in a dream striking the feet of a symbolic world-kingdoms metallic image, obliterating it, until “the stone that smote the image became a great mountain, and filled the whole Earth” (Daniel 2).  God said it like this in The Revelation: “And the seventh angel sounded: and there were great voices in heaven, saying, The kingdoms of this world are become the kingdoms of our Lord, and of His Christ; and he shall reign for ever and ever” (The Revelation 11:15).

Charles Bolden (NASA) told the House Science, Space, and Technology committee scientists have identified 95% of asteroids more than a half-mile in diameter.  Is it possible God could keep hidden from mankind (until the moment it’s too late to do anything about it!) a terrifyingly large asteroid capable of destroying planet Earth by setting its entire surface on fire?  One that could, “shake the heavens, and the Earth shall remove out of her place, in the wrath of the Lord of hosts, and in the day of his fierce anger” (Isaiah 13:9-13)?  One He set in motion from the Creation of the World, prepared for its exact prophetic time of fulfillment (6,000 years)?  You decide.

Approximately 808 Weeks (Sabbaths) Remaining Till Christ's Return!
Posted by Gabriel at 8:55 AM