My Encounter with God on Chickies Rock 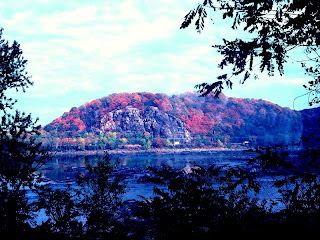 In the Introduction of my book, I write briefly of a miraculous encounter I had at the age of 12 back in 1983:

… when I was 12 years old, my father noticed an ad in the local newspaper about a traveling prophet who was coming to a church in a nearby town. Intrigued, dad decided our family should go. Now we had never stepped foot in the church and did not know anyone there, but near the end of the prophet’s preaching, he walked back the central aisle, pointed at me and said, “Stand up, son.  Do you know God gave you your name?  For your name is Gabriel!  And God’s placed the creativity of 4 men inside of you.  Son, you will be like John the Baptist in the last days preparing the people to meet the Lord, for God is going to place you in a position one day to be able to influence multitudes of people.”  I sat back down in my pew in a state of bewilderment.  I was still wondering how the prophet knew my name!  It has been 25 years since that night and I have never forgotten the words that prophet spoke over my life.

Today, I want to make mention of a few more very cool details about this amazing story that I didn’t in the book.  First, the location of this church was on the top of a mountain known locally as Chickies Rock.  There’s even a trail up there where you can walk to see out over the (See video below).  How many stories in the Bible can you recall where God desired to meet with prophets on mountain tops?  Well, yes, this prophetic scene in my life happened on the top of a mountain!

Secondly, the message the traveling prophet was speaking that night way back in 1983 was the ancient held theory that God’s 7 Day Creation story mirrored a complete and total 7,000 year master plan God had for this Earth (i.e. each creation day represented a 1,000 year period).  In other words, the prophet who spoke those words over me that night believed the Earth was young (not even 6,000 years old!) and that when year 6,000 arrived Jesus Christ would return, bringing in the final, restful, millennial (1,000 year) Sabbath day reign, where all the resurrected righteous will live in peace and harmony with God on Earth.

Folks, I had NO IDEA that this too would one day be MY MESSAGE!!!  And that God would reveal to me MANY MORE AMAZING THINGS about His prophetic 7 Day Creation story and other stories in the Bible that the traveling prophet did not know!!!  But without a doubt, that man that night was sent by God!  His words were truth and so are mine!  I tell you these things, not so you would marvel about me, but ONLY so that you would BELIEVE in the message God has given me to speak on His behalf.  So do you?  Jesus Christ is going to return to this planet in about 15 years!  GET READY!!!!!!!

Approximately 793 Weeks (Sabbaths) Remaining Till Christ's Return!
Posted by Gabriel at 11:37 AM