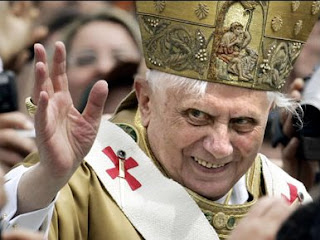 In the 12th century AD, a catholic seer named St. Malachy had a vision of all the remaining pontiffs to come until the “end” of this age of sin.  He uttered 111 short Latin phrases, each of which gave secret clues into the identity of the 111 popes to come; and then he spoke one final chilling doomsday prophecy concerning the time of the last pope, or the 112th pontiff: “During the final persecution the seat of the holy roman church will be occupied by Peter the Roman, who will feed the sheep in many tribulations, after which the seven hilled city will be destroyed, and the terrible Judge will judge His people … THE END”  This prophecy appears to be referring to the time of the Antichrist (when the whole world will endure Great Tribulation for 3½ years), and since the city of Rome (where the Vatican stands) is known as the city on seven hills, it appears to be aligning with Revelation chapter 17 & 18 where the destruction of the seven hilled city is foretold to occur right before the final battle of Armageddon.

So where are we today on this list of 111 pontiffs?  The current pope Joseph Ratzinger is number 111 !!!  Pope John Paul II was number 110.  What was St. Malachy’s prophecy about the 110th pope?  It was “De labore solis” meaning: the sun’s eclipse, or the sun’s labor.  John Paul II was the only pontiff on the list who was born on an eclipse and later entombed during an eclipse!  And what is St. Malachy’s prophecy about the 111th pope?  It is “Gloria olivae” meaning: the glory of the olive.  Aware of St. Malachy’s prophecy, the cardinals tried hard in AD 2005 to not pick a pontiff having anything to do with an olive, but what they couldn’t control was the name he would choose to rule under.  And what did Ratzinger pick?  He chose Benedict XVI.  And what is the symbol of the Benedictine order?  You guessed it … the OLIVE!

So here’s the deal … I’m not saying St. Malachy’s prophecy is absolute truth, although it seems to be shaping up that way.  But what I am doing is making you aware of this intriguing prophecy, so you can keep watch!  John Paul II had ruled for 27 years when he died in AD 2005 at 84 years of age.  Benedict XVI has now ruled for 7 years, and he turns 85 years old April 16, AD 2012!  There is talk of his strength subsiding, and even talk of him possibly resigning if he can’t fulfill his duties.  So how much longer will he live?  I don’t know.  What I do know is what God has told me … the “end” of this age of sin (or Earth’s 6,000 year!) is still about 16 years away.  Therefore, it seems to be shaping up quite nicely for one final pontiff (Peter the Roman) to reign, don’t you think?


Watch "The prediction of the last pope to come before the Antichrist" video HERE.
Informative website to keep watch: www.ProphecyOfThePopes.com