The Apostle Paul Feared He Could End Up In Hell 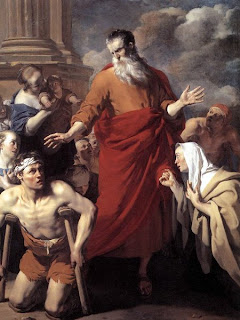 Our beloved Apostle Paul wrote something about himself and his beliefs in one of his letters that is a dagger (death blow) to the heart of ALL incorrect doctrine concerning salvation (how one obtains eternal life).  But here’s the shocking and mind-boggling irony of it all … the incorrect salvation doctrine is being formulated from words out of PAUL’S LETTERS!  Do you understand?  IT’S THE SAME MAN !!!  In other words, like I spoke about last week – read blog here – people our misconstruing Paul’s words, twisting them around to mean something other than what he actually meant.  How terrible.  How tragic.

So what did Paul write?  Listen to him carefully: “I keep under my body, and bring it into subjection: lest that by any means, when I have preached to others, I MYSELF SHOULD BE CASTAWAY” (I Corinthians 9:27).  Oh, my!  The English word “castaway” was translated from the Greek word “adokimos” meaning: failing the test, rejected.  This was no doubt a throwback to the words Paul heard Jesus had spoken about the Day of Judgment, when the damned will hear: “DEPART (CASTAWAY) FROM ME, all ye workers of iniquity” (Luke 13:27).  Can you imagine?  Paul feared he could end up in hell!!!  Did Paul believe (mentally acknowledge) Jesus died on the cross for his and all mankind’s sins?  OF COURSE HE DID!!!  He lived on Earth when Christ lived on Earth; he talked extensively with Christ’s disciples; he knew everything about Christ’s life and believed it was ALL true!  So was that ever going to change in his mind?  OF COURSE NOT!!!  Furthermore, Paul spent his days preaching about Christ to others!  And YET, he STILL feared he could end up in hell.

So what is it?  What MUST a person REALLY DO to obtain eternal life?  What did Paul HONESTLY believe (deep down inside his heart) about the subject?  You who like to tilt your chin back and puff your chest out, who only know how to continually parrot a few trite words from Paul’s letters – taken horribly out of context! – “Saved by grace … not of works!”  Really!!!???  So tell me again why you believe you’re going to heaven?  Because you believe (mentally acknowledge) Jesus died on a cross for your sins?  REALLY!!!???  And you got that understanding out of Paul’s letters?  The one who mentally understood Jesus was the savior of the world better than you do, yet still feared he could end up in hell!  You've been once saved always saved?  REALLY!!!???  And you came to that understanding out of Paul's letters?  Well, then you better go straighten him out on the meaning of his own words, because he still feared he could end up in hell!  LOL  So you don’t have to do ANYTHING (no works of love!) to obtain eternal life?  REALLY!!!???  And you got that understanding from Paul’s words, too?  The one who gave up his life to be an itinerant preacher, yet still feared he could end up in hell!

Do you see the irony?  If you are one of the those whose salvation doctrine only consists of a few misinterpreted words out of Paul's letters like “Saved by grace … not of works!” … you are dreadfully mistaken!  Without a doubt, you are confused about the truth of God’s Word concerning salvation (how one obtains eternal life).  And yes, you are deceived about the Apostle Paul’s beliefs on the issue, too!  It is your pride and sinful lusts (willful disobedience to God's 10 love commandments) that keep you holding onto these demonic lies.  But I have been sent to warn you today, “Wise up!  Soften your heart!  And turn from your wicked (non-loving) ways before the last breath of air rattles out of your lungs."